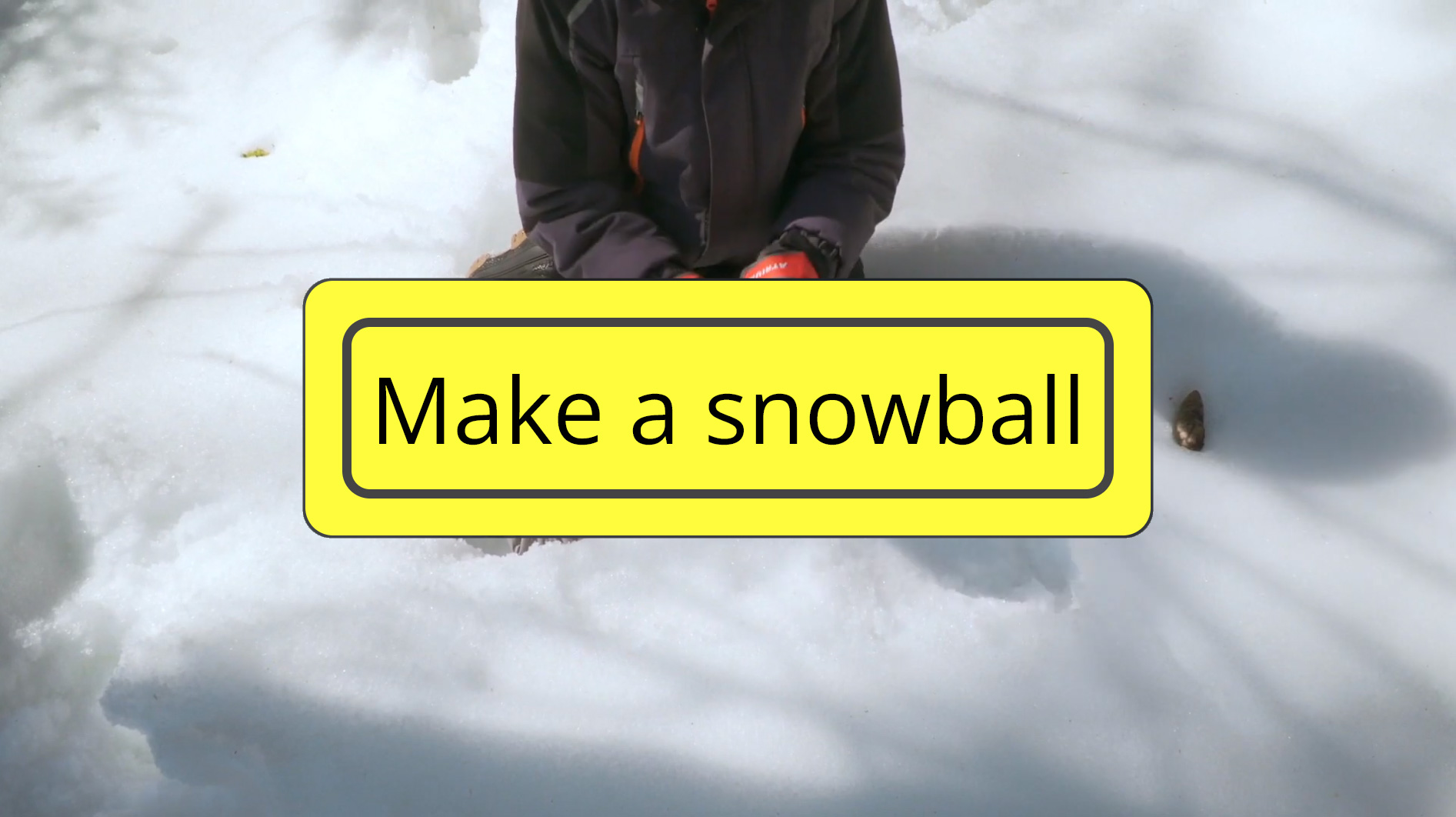 Using the Tar Heel Gameplay website, it’s easy to make games and activities out of YouTube videos. Tar Heel Gameplay has enabled me to convert ten of Francis Alÿs “Children’s Games” videos recorded from around the world, into very low-pressure accessibility activities. If you can activate a mouse click or a space bar press (perhaps using special assistive technology), it should be possible to play these, certainly on a Windows PC using Chrome.

If you sign up for an account at Tar Heel Gameplay, you can create simple activities yourself. It’s possible to make a multiple-choice adventure game, for example, with branching choices from the “Advanced” Create tab. Easier still is to make a “Basic” gameplay where the chosen video will pause after a fixed length of time, waiting for the user to decide when the action should continue. Whatever you decide, give the Gameplay a name, rating, topic and language then publish it. Next select Home, Find a Gameplay, then search for your creation. Click on it to play. You can then share the link as I’m doing with you below.

Games adapted in this way include: Kick the Bottle (game 1), African Subbuteo (game 27), Sandcastles (game 6), Skipping (game 22), Snow Games (game 33), Snail Races (game 31), Don’t Step on the Cracks (game 23), Hand Stacks (game 21) and a couple for parental guidance perhaps… The Wheel (game 29) played by a very brave lad, and Mirrors (game 15) a deserted town first-person shooter for kids in real life using the sun as a weapon. Some of these activities have a surprise ending such as Snail Races and African Subbuteo. 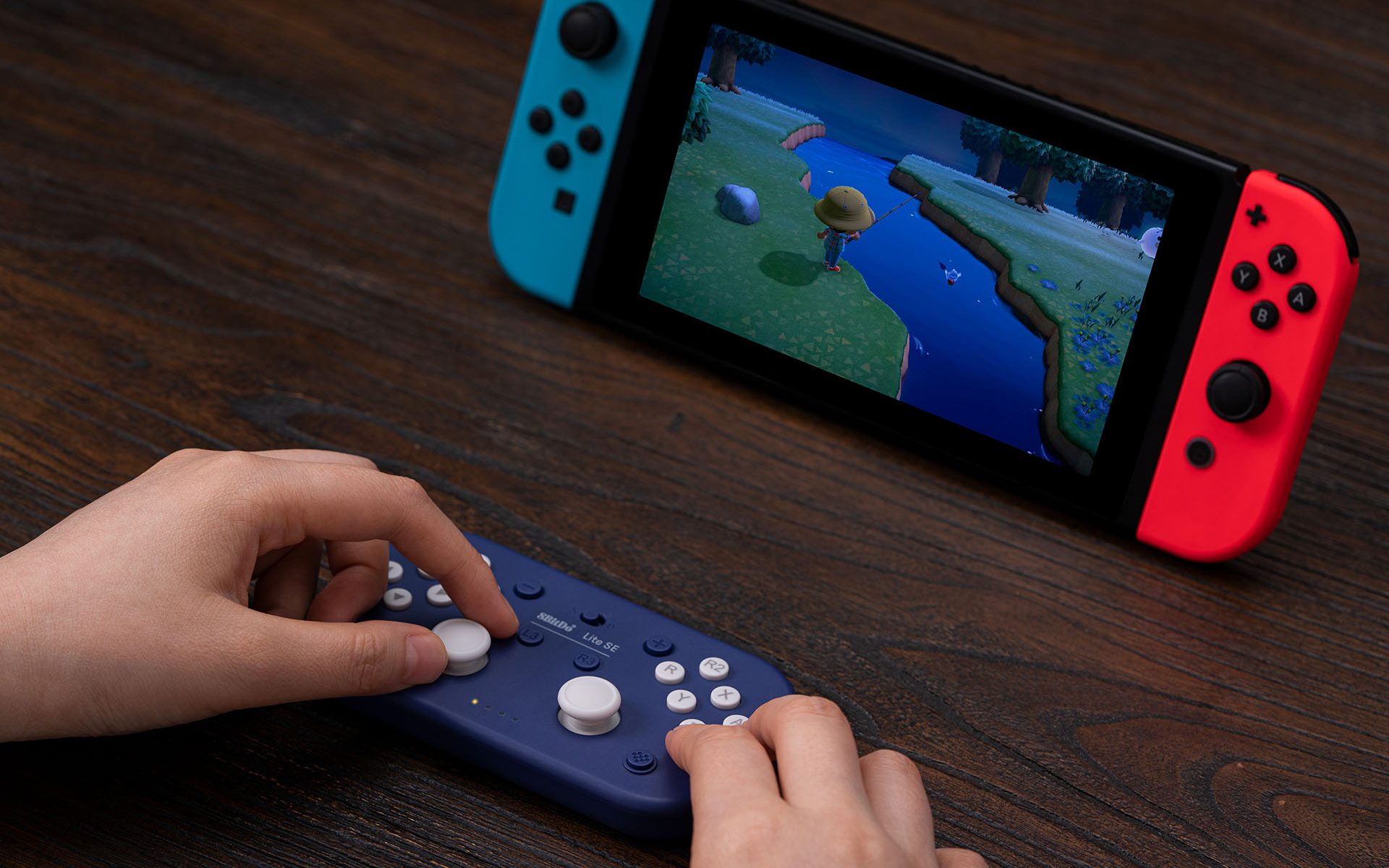 The Lite SE gamepad from 8BitDo is a lightweight low-pressure gamepad designed for use with the Nintendo Switch, PC and Android devices.

The thumbsticks and buttons all take less strength to activate compared with a conventional standard game controller. The sticks need about 25g of pressure and the buttons just a tiny bit more.

All of the main controls are available on the surface, so there is no need to reach around to the top for the normal shoulder buttons. Lightweight alterative buttons are also available for the stick-click buttons (labelled L3 and R3 here). The L2 and R2 buttons are digital (full on or off) in effect.

The controller is roughly 12 x 6.5cm. The distance from the stick to the furthest button is approximately 3.5cm. The buttons are about 7mm in diameter.

The controller has a ‘D’ Direct Input mode that is suitable for converting to Xbox or PlayStation use via a Titan One or Titan Two adapter using a suitable ‘script’. These scripts can boost the stick sensitivity further. Please contact us if you need help with this or follow those links.

Other lightweight controllers are available, such as those featured in our earlier post on modified standard gamepads:

Easy To Play Games is a new website hosting a range of simple control games for PC. Most are intended to be playable with one or two buttons alone. New games are being added on a regular basis at the time of writing.

Darts: This has three difficulty levels where aiming becomes progressively more difficult. It also has a free play mode, where you can practice or play your own Darts games. This might be closest to the bullseye, round-the-clock, cricket, or my favourite (and very mean) game of Killer Darts.

Dino Safari: Stop the dinosaurs running off the screen to attack the villagers. Very much like many modern ticket-redemption target-shooting arcade games, but with one-button control. A bit of blood in this one, so not one for very young children. This is especially the case for the somewhat grisly “Manic Santa” game, so parental guidance is advised for these two.

Racing Game: A top-down one-button racing game with big tracks to get around. Good fun.

Blitz Game: A classic (1979!) game made one-button accessible with a range of difficulty levels. Your plane is losing altitude fast over a cityscape (which I like to imagine is deserted). Drop bombs to clear a runway to land on.

Mega Worm Hole: A Jetpack Joyride-influenced game with many levels to get through.

All sorts of games have been pouring out lately. These include a Quiz game; Hangman; Rock, Paper, Scissors; Shooters and more. The author Ben seems very receptive to ideas for improvements, too.

The games are free to download and play,  but those who subscribe via a Patreon subscription, are given early access perks. This includes a line to the author to make suggestions for updates and new games.

Find these games and more at: https://www.easytoplaygames.com/

The GCM XAC is an expansion kit for the Microsoft Xbox Adaptive Controller. It’s one of a range of game control mixer systems from oneswitch.org.uk and Celtic Magic which all make use of a Titan Two adapter. These systems aim to enhance the abilities of players who can operate at least one thumbstick or joystick but not a full gamepad.

The GCM kit consists of an instruction booklet, Titan Two adapter and two upgrade options including the Bluetooth kit. It’s intended to be used with an Xbox Adaptive Controller and one or two joysticks but it can also work with other standard gamepads. You can see the instructions online by visiting oneswitch.org.uk, then going to the Library, then Instructions and in this example clicking on GCM XAC Playstation.

The GCM XAC Titan Two is an expansion kit for the Microsoft Xbox Adaptive Controller from OneSwitch.org.uk. We have used it to support people who can only activate a relatively small number of physical controls at once.

It has a number of features of note including:

The left and right-stick can be set to act in one of 24 different ways at any time. Basic modes include access to left-stick, right-stick, d-pad, shapes/ABXY and the shoulder-buttons. Other modes include PS4/PS5 glide-pad emulation, and a way to drive or explore a 3D world with a single stick. Sticks can be mixed in any combination. Other SHIFT features are detailed in the video above.

SHIFTING is via the XAC VIEW button, either tapping or holding and using other controls at the same time.

By connecting a Windows PC to the PROG socket on the back of the Titan Two, a large range of PC compatible controls can be added. This includes speech with analogue control such as saying “walk”, “jog”, “run”, and “sprint” to get different forward speeds. A large range of mixes is possible.

It’s possible to use a XAC with a Playstation 5, PS4, PS3, Nintendo Switch, Windows PC (as a joystick or a mouse) and Raspberry Pi. Connection with other devices is possible too (eg the SEGA Dreamcast and Playstation), sometimes requiring extra hardware..

A number of custom configurations can be requested, including shielding off controls that may causing access problems. 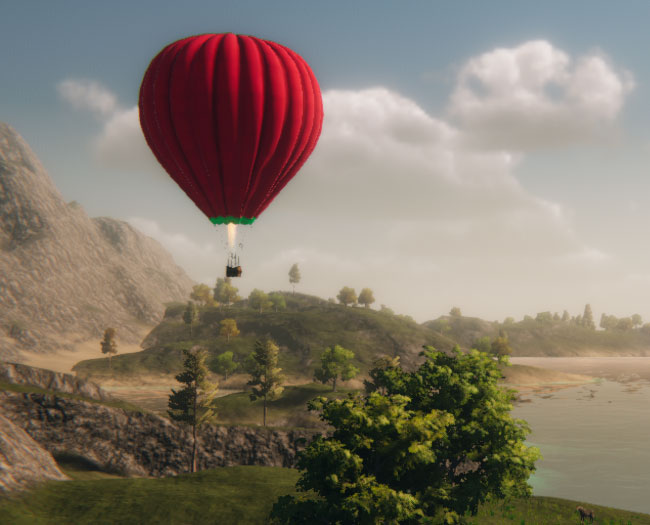 A selection of single button (aka one-switch) games for the PC that were created as part of a One Button Game Jam 2020 competition in 2020. These games are designed to be started, played and restarted using a single button (normally the SPACE BAR or the mouse left-click). Some of the entries are also low pressure games, where you don’t need to do anything very quickly. Most are for PC, Mac, Linux and/or are possible to play online. All are donationware: you can choose to play them for free or make a donation to the programmers.

Chill Balloon. A relaxed balloon flying game. Very low pressure. Fly at your leisure over a British countryside, with animals freely running around. There is just point of accuracy required at the end, where you try to land on a large round target area.

Little Seed Grow. Grow a seed into a full fruit or vegetable, and can choose to feed a beetle too while doing so. One switch will control the weather and time of day to match the needs of the plant.

One Button Peggle. An online bagatelle/Peggle like game for one switch. Try to hit all the pegs with your limited supply of balls.

One Button Dungeon. Enter every room to complete this simple puzzle game. 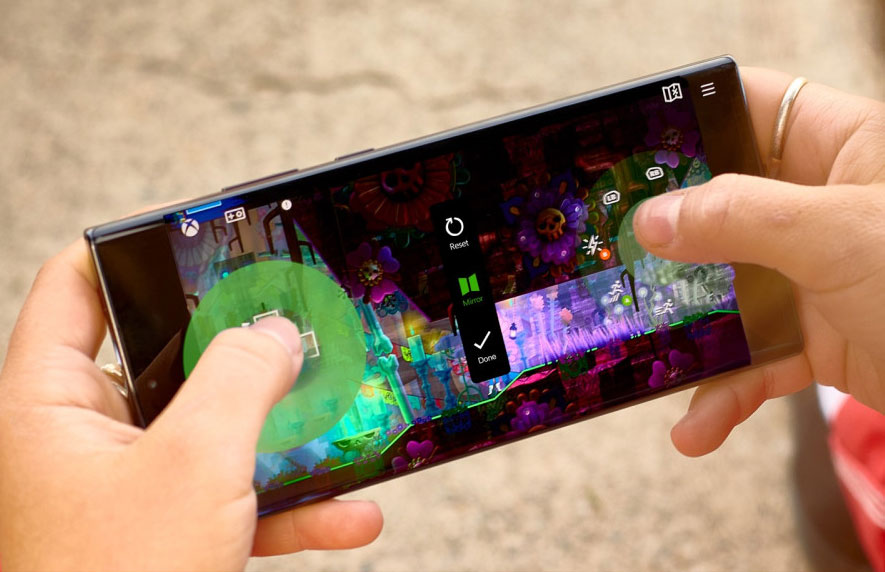 With the Xbox subscription service “Game Pass Ultimate”, it’s possible to play a small range of Xbox mobile games purely with touch-screen controls. No additional controller required. These are presently…

…there are customisation options allowing you to move the on-screen touch controls into a more comfortable position. It’s also possible to use game action symbols, such as a running figure, in place of conventional button symbols, making things easier to comprehend.

For more information on access to gaming on Android, please use the ‘Android’ category and if you have any questions about accessible gaming, please visit the ‘Contact Us’ page.

Filter By: Filter By Clear filters

You can find out more about which cookies we are using or switch them off in settings.

This website uses cookies so that we can provide you with the best user experience possible. Cookie information is stored in your browser and performs functions such as recognising you when you return to our website and helping our team to understand which sections of the website you find most interesting and useful.

Strictly Necessary Cookie should be enabled at all times so that we can save your preferences for cookie settings.

If you disable this cookie, we will not be able to save your preferences. This means that every time you visit this website you will need to enable or disable cookies again.

This website uses Google Analytics to collect anonymous information such as the number of visitors to the site, and the most popular pages.

Please enable Strictly Necessary Cookies first so that we can save your preferences!